To Revert to the Theory of ‘Aryan Invasion’ (Part 5)


Seals and amulets are a very significant constituent of the Bactria-Margiana Archaeological Complex, since the individual motifs as well as the narrative scenes depicted thereon throw valuable light on the religious beliefs and practices of the people. The seals were made of metals, such as copper / bronze and silver, while the amulets were usually of stone, mostly black steatite. These latter usually show, amongst other motifs, snakes, scorpions, eagles, two-humped (typically Bactrian) camels, felines, etc. The snake seems to be such a favourite that it is depicted on the ceramic ‘rituals bowls’ as well (already referred to). The metal seals are to be noted, besides other motifs, for geometric ones. But most spectacular are the narratives on the cylindrical seals. We propose to illustrate these later when their narratives will also be discussed.

A good deal of controversy surrounds the origin of the Bactria-Margiana Archaeological Complex, namely whether it was a local development from Namazga V or it was born out of an external impetus. Be that as it may, Carbon-14 dates indicate that Period 1 at Gonur Depe may have commenced around 2100 BCE and continued up to 1900 BCE, while Period 2, which is what is known as the BMAC proper, may be ascribed to circa 2000-1700 BCE.

AN ANALYSIS OF THE VARIOUS VIEWS

In the earlier part of this Address we had stated that we shall examine the viewpoints of Professors Romila Thapar and R. S. Sharma on the one hand and of Professors Asko Parpola and Viktor Sarianidi on the other. Thus, we begin with the views of the first two scholars.

Having failed to establish an ‘Aryan Invasion’ of India, Professor Thapar comes out (1989-91: 259-60) with a new theory, viz.: “If invasion is discarded then the mechanism of migration and occasional contacts come into sharper focus. The migrations appear to have been of pastoral cattle-breeders who are prominent in the Avesta and Rigveda”.

Following faithfully the footsteps of Thapar and amplifying her stand, Professor Sharma avers (1999: 77): “... the pastoralists who moved to the Indian borderland came from Bactria-Margiana Archaeological Complex or BMAC which saw the genesis of the culture of the Rigveda.”

Both Thapar and Sharma are even now labouring under the 19th century belief that the Vedic Aryans were nomads. But have they even once cast a glance at the make-up of the Bactria-Margiana Archaeological Complex. As would have been absolutely clear by now, the BMAC is a fully developed civilization with all the trappings of urbanism. How can then Thapar and Sharma devalue the Bactria-Margiana people and call them ‘pastoral cattle-breeders’? Just to fit into their preconceived notion that the¡Rigvedic Aryans were ‘nomads’?

In his paper, ‘Margiana and the Aryan Problem’, Asko Parpola states (1993: 47): “These excavations at Mehrgarh, Sibri, Nausharo and Quetta have conclusively shown that immigrants bringing with them an entire new cultural complex have settled in Baluchistan, with close parallels in Gurgan, south Turkmenistan, Margiana and Bactria of the Namazga V-VI period.”

Whereas certain parallels between the Quetta-Sibri finds and those from the Bactria-Margiana regions are acceptable, one is really baffled by the succeeding statement of Parpola, namely: “A newly found antennae-hilted sword from Bactria paralleling those from Fatehgarh suggests that this same wave of immigrants may also have introduced the Gangetic Copper Hoards into India.” (Fig. 16).

I am sure Parpola is aware of the fact that the Copper Hoards of the Gangetic Valley, as would be seen from the illustration that follows (Fig. 17), include many other very distinctive types, such as anthropomorphic figures, harpoons, shouldered axes, etc. which have never been found in Bactria. 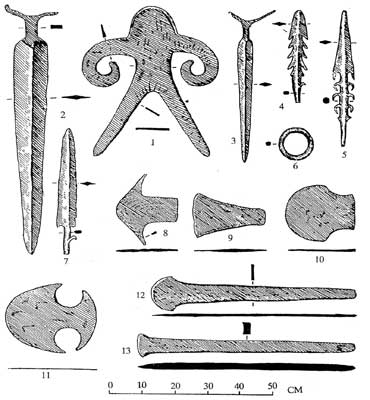 Further, the overall cultural ethos, including the distinctive pottery, of the Gangetic Copper Hoards is totally different from that of the Bactria-Margiana Archaeological Complex and that the former cannot be derived from the latter. But more strange is the argument that the occurrence of a single antennae-hilted sword in Bactria would entitle that region to be the ‘motherland’ of the Gangetic Copper Hoard people who produced these copper weapons and other associated objects in hundreds, if not thousands. If this logic is stretched further, I will not be surprised if one day Parpola comes out with the thesis that the Harappan Civilization too originated in Margiana, because in that region (at Gonur) has been found one steatite seal bearing typical Harappan inscription and motif (Fig. 18), unmindful of the fact that such seals constitute an integral part of the Harappan Civilization. 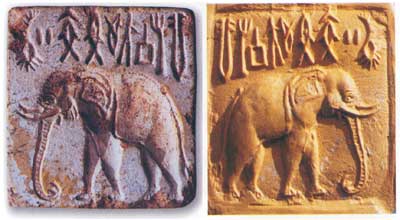 Fig. 18. Harappan seal from Gonur, and its impression.

If, following the footsteps of Parpola, I were to say that the find of the well known seal of the ‘Persian Gulf’ style at Lothal in Gujarat establishes that the Persian Gulf Culture (which abounds in such seals) originated in Gujarat or, again, if I said that the occurrence of a cylinder seal at Kalibangan in Rajasthan entitles Rajasthan to be the ‘motherland’ of the Mesopotamian Culture (wherein cylinder seals are found in large numbers), I am sure my learned colleagues present here would at once get me admitted to the nearest lunatic asylum.

One finds yet another amusing example of a similar kind of unbridled imagination when Parpola calls the ground-plan of the palace at Dashly-3, datable to circa 2000 BCE, “the prototype of the later Tantric mandalas / yantras”. He then goes on to add: “That the religion of the Dasas [who are mentioned in the Rigveda and whom he identifies with the Bactria-Margiana people] was an early form of Ýaktism is also suggested by the ground plan of the palace of Dashly-3 in Bactria closely agreeing with the later Tantric mandalas...”(ibid.: 52). For the sake of unambiguity, I reproduce now the drawings of the Dashly-3 Palace and the Mahakali yantra (Fig. 19), as published by Parpola himself (ibid.: 62), and leave it to the learned scholars to decide whether they too would like to accompany Parpola in crossing this 4000-year-old and 4000-kilometre-long bridge along with Parpola. 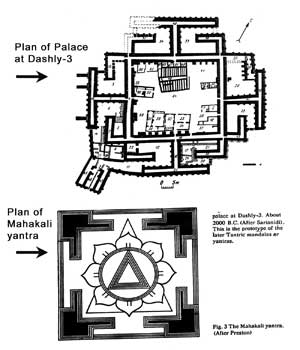 Must we really indulge in such a kite-flying just to support our preconceived notions?