Heliodorus was a Greek ambassador to India in the second century B.C. Few details are known about the diplomatic relations between the Greeks and the Indians in those days, and still less is know about Heliodorus. But that the column he erected at Besnagar in central India about 113 B.C.(1). is considered one of the most important archaeological finds on the Indian subcontinent. 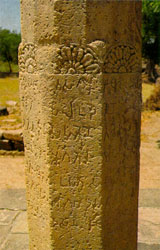 It is known that Heliodorus was sent to the court of King Bhagabhadra by Antiakalidas, the Greek king of Taxila. The kingdom of Taxila was part of the Bactrian region in northwest India, conquered by Alexander the Great in 325 B.C. By the time of Antialkidas, the area under Greek rule included what is today Afghanistan, Pakistan and Punjab.(2)

The column erected by Heliodorus first came to notice in 1877, during an archaeological survey by General Cunningham. The inscription, however, went unnoticed, because of the pillar's thick coating of red lead paste. It had been the custom of pilgrims who had worshipped there to smear the column with vermillion paste. The column, Cunningham deduced from its shape, was from the period of the Imperial Guptas (3) (A.D. 300-550). Thirty-two years later, however, when the inscription was brought to light, it became clear that the monument was several centuries older. (4)

In January 1901, a Mr. Lake discerned what he thought was some lettering on the lower part of the column, and removal of some vermillion paste proved him right. Dr. J.H. Marshall, who was accompanied by Mr. Lake, described the discovery in the Journal of the Royal Asiatic Society in 1909. Cunningham, Marshall explained, had been mistaken about the age of the column and "could little have dreamt of the value of the record which he just missed discovering." A glance at the few letters exposed was all that was needed to show that the column was many centuries earlier than the Gupta era. This was, indeed, a surprise to me, but a far greater one was in store, when the opening lines of the inscription came to be read." (5) 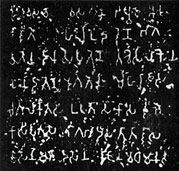 A reproduction of the inscription, along with the transliteration and translation of the ancient Brahmi text, is given here as it appeared in the Journal of the Royal Asiatic Society.

" This Garuda-column of Vasudeva (Visnu), the god of gods, was erected here by Heliodorus, a worshipper of Vishnu, the son of Dion, and an inhabitant of Taxila, who came as Greek ambassador from the Great King Antialkidas to King Kasiputra Bhagabhadra, the Savior, then reigning prosperously in the fourteenth year of his kingship."

From the inscriptions it is seems clear Heliodorus was influenced by Vedic principles that he could be considered to be a Vaisnava, a follower or worshipper of Visnu. Professor Kunja Govinda Goswami of Calcutta University concludes that Heliodorus " was well acquainted with the texts dealing with the Bhagavat [Vaisnava] relgion." (6)

To our knowledge, Heliodorus is the earliest Westerner on record to adopt Vedic principles. But some scholars, most notably A.L. Basham (7) and Thomas Hopkins, are of the opinion that Heliodorus was not the only Greek to adopt such principles. Hopkins, chairman of the department of religious studies at Franklin and Marshall College, has said " Heliodorus was presumably not the only foreigner who converted to Vaisnava devotional practices -- although he might have been the only one who erected a column, at least one that is still extant. Certainly there must have been many others." (8)

It is also interesting to note that the Heliodorus column has other historical merits. Around the turn of the century, a number of Indologists (Weber, Macnicol, and others) had noted " points of similarity' between the Vaisnava philosophy of unalloyed devotion and Christian doctrine. They had argued that Vaishnavism (worship of Visnu and Krsna) must have been an offshoot of Christianity, and cited the similarity between stories about Krsna and about Christ to further support their claim.(9) But the discovery of the inscription on the Heliodorus column laid their speculations to rest. Here was conclusive archaeological proof that the Vaisnava tradition antedated Christianity by at least two hundred years.

The column also struck down another popular notion. For centuries it was a common belief among scholars that India's orthodox tradition did not accept converts. An Islamic historian, Abu Raihan Alberuni, who went to India in A.D. 1017, tried to explain in his book Indica why the Indian orthodoxy did not admit foreigners. Alberuni suggested that the practice developed only after the Moslem incursion into India, sometime after A.D. 674.(10) Antagonism between the Moslems and Hindus seems to be the main reason behind the non conversion practice. For many centuries prior to Moslem presence, however, there had been no bar to conversion into the orthodox fold, as attested by the Heliodorus column.

(Adapted and reprinted from Clarion Call Magazine with permission.)