To Revert to the Theory of ‘Aryan Invasion’ (Part 1)

Distinguished fellow delegates and other members of the audience,

I am most grateful to the organizers of this conference, in particular to the President, Professor Maurizio Tosi, not only for inviting me to participate in this Conference but also for giving me the additional honour of delivering the Inaugural Address. Indeed, I have no words to thank them adequately for their kindness. Perhaps this is the first occasion when a South Asian is being given this privileged treatment by the European Association of South Asian Archaeologists.

The conference hall is full of scholars from all parts of the world – from the United States of America on the west to the Land of the Rising Sun, Japan, on the east. All these scholars have contributed in a number of ways to our understanding of the past of South Asia, and I salute them with all the humility that I can muster. However, I hope I will not be misunderstood when I say that some amongst us have not yet been able to shake off the 19th-century biases that have blurred our vision of South Asia’s past.

As is well known, it was the renowned German scholar Max Muller who, in the 19th century, attempted for the first time to date the Vedas. Accepting that the Sutra literature was datable to the 6th century BCE, he gave a block-period of 200 years to the preceding three parts of the Vedic literature, namely the Aranyakas, Brahmanas and Vedas. Thus, he arrived at 1200 BCE as the date of the Vedas. However, when his contemporaries, like Goldstucker, Whitney and Wilson, objected to his ad-hocism, he toned down, and finally surrendered by saying (Max Muller 1890, reprint 1979): “Whether the Vedic hymns were composed [in] 1000 or 1500 or 2000 or 3000 BC, no power on earth will ever determine.” But the great pity is that, in spite of such a candid confession by the savant himself, many of his followers continue to swear by his initial dating, viz. 1200 BCE.

The ultimate effect of this blind tenacity was that when in the 1920s the great civilization, now known variously as the Harappan, Indus or Indus-Sarasvati Civilization, was discovered in South Asia, and was dated to the 3rd millennium BCE, it was argued that since the Vedas were no earlier than 1200 BCE, the Harappan Civilization could not have been Vedic. Further, since the only other major linguistic group in the region was the Dravidian, it was held that the Harappans were a Dravidian-speaking people.

Then came the master stroke. In 1946, my revered guru Mortimer Wheeler (later knighted) discovered a fortification wall at Harappa and on learning that the Aryan god Indra had been referred to as puramdara (destroyer of forts) he readily pronounced his judgment (Wheeler 1947: 82): “On circumstantial evidence Indra [representing the Aryans] stands accused [of destroying the Harappan Civilization].” In further support of his thesis, he cited certain human skeletons at Mohenjo-daro, saying that these were the people massacred by the Aryan invaders. Thus was reached the peak of the ‘Aryan Invasion’ theory.

And lo and behold! The very first one to fall in the trap of the ‘Aryan Invasion’ theory was none else but the guru’s disciple himself. With all the enthusiasm inherited from the guru, I started looking for the remains of some culture that may be post-Harappan but anterior to the early historical times. In my exploration of the sites associated with the Mahabharata story I came across the Painted Grey Ware Culture which fitted the bill. It antedated the Northern Black Polished Ware whose beginning went back to the 6th-7th century BCE, and overlay, with a break in between, the Ochre Colour Ware of the early 2nd millennium BCE. In my report on the excavations at Hastinapura and in a few subsequent papers I expressed the view that the Painted Grey Ware Culture represented the early Aryans in India. But the honeymoon was soon to be over. Excavations in the middle Ganga valley threw up in the pre-NBP strata a ceramic industry with the same shapes (viz. bowls and dishes) and painted designs as in the case of the PGW, the only difference being that in the former case the ware had a black or black-and-red surface-colour, which, however, was just the result of a particular method of firing. And even the associated cultural equipment was alike in the two cases. All this similarity opened my eyes and I could no longer sustain the theory of the PGW having been a representative of the early Aryans in India. (The association of this Ware with the Mahabharata story was nevertheless sustainable since that event comes at a later stage in the sequence.) I had no qualms in abandoning my then-favourite theory.

But linguists are far ahead of archaeologists in pushing the poor Aryans through the Khyber / Bolan passes into India. In doing so, they would not mind even distorting the original Sanskrit texts. A case in point is that of the well known Professor of Sanskrit at the Harvard University, Professor Witzel. He did not hesitate to mistranslate a part of the Baudhayana Srautasutra (Witzel 1995: 320-21). In 2003 I published a paper in the East and West (Vol. 53, Nos. 1-4), exposing his manipulation. Witzel’s translation of the relevant Sanskrit text was as follows:

"Aya went eastwards. His (people) are the Kuru-Pancalas and Kasi Videha. This is the Ayava(migration).(His other people)stayed at home in the west. His people are the Gandhari, Parasu and Aratta. This is the Amavasava (group).

Whereas the correct translation is:

According to the correct translation, there was no movement of the Aryan people from anywhere in the north-west. On the other hand, the evidence indicates that it was from an intermediary point that some of the Aryan tribes went eastwards and other westwards. This would be clear from the map that follows
(Fig. 1). 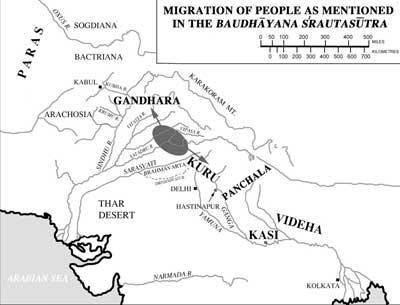 Professor Witzel and I happened to participate in a seminar organized by UMASS, Dartmouth in June 2006. When I referred, during the course of my presentation, to this wrong translation by the learned Professor, he, instead of providing evidence in support of his own stand, shot at me by saying that I did not know the difference between Vedic and Classical Sanskrit. Should that be the level of an academic debate? (Anyway, he had to be told that I had the privilege of obtaining in 1943 my Master’s Degree in Sanskrit (with the Vedas included), with a First Class First, from a first class university of India, namely Allahabad.)