To Revert to the Theory of ‘Aryan Invasion’ (Part 2)

TO REVERT TO THE THEORY OF ‘ARYAN INVASION’

The year 1964 saw this theory being pushed back in the reverse gear. George F. Dales published a paper in which, after presenting a thorough analysis of the evidence, he completely lambasted the massacre theory and, in a way, rescued Indra from the charge of having been a marauder. Since then many other scholars (e.g. Danino 2006, Kenoyer 1998, Lal 2002 and 2005, Renfrew 1988, Shaffer and Lichtenstein 1999) have adduced further evidence to add successive nails on to the coffin of the ‘Aryan Invasion’ theory.

Unfortunately, however, the ghost of ‘Aryan Invasion’ is not buried deep enough. It is being resurrected in the form of ‘Aryan Immigration’, and in this context the Bactria-Margiana region is said to be the source. Out of the scholars who stand by this rejuvenated thesis, I shall deal here with four representative ones, namely Professors Romila Thapar and R. S. Sharma from India and Professors Asko Parpola and V. I. Sarianidi from the West.

But before the views of these four scholars are examined it seems appropriate to spell out in some detail the nature of the Bactria-Margiana Archaeological Complex (BMAC), even though some of the scholars present here may be familiar with it. I would also like to take this opportunity to heartily congratulate Professor Sarianidi and other archaeologists whose sustained fieldwork has placed the BMAC on the same high pedestal as occupied by other civilizations of the ancient world.


CHARACTERISTIC FEATURES OF THE BMAC

First, a map of the region involved is given below (Fig. 2): 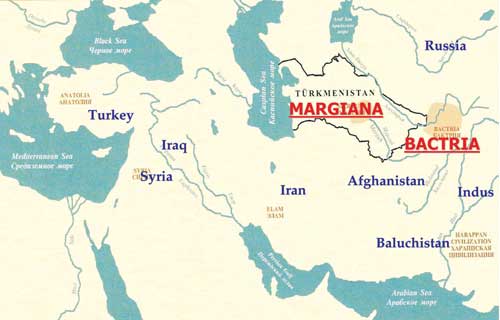 It is now proposed to discuss, though very briefly, the following features of the BMAC: (i) town-planning and monumental architecture; (ii) the ceramics; (iii) stone objects; (iv) metal objects; (v) sculptural art; (vi) seals and amulets; and finally (vii) the chronological horizon. This seemingly uncalled for exercise is being done in order to demonstrate that (a) the BMAC people were not nomads, as held by my Indian colleagues; and (b) these characteristic features of the BMAC never ever reached east of the Indus up to the upper Ganga-Yamuna doab – an area which was the homeland of the Rigvedic people, as is clear from the Nadi-stuti verses (10.75.5 and 6) of the Rigveda itself.

(I) TOWN-PLANNING AND MONUMENTAL ARCHITECTURE

The BMAC settlements, by and large, were well planned and contained monumental structures. This is abundantly clear, for example, from the excavated remains at Dashly-3, in Bactria, where a ‘cultic centre’ has been found located within a series of three successive fortifications. The cultic centre, circular on plan, with a diameter of 40 metres, was provided with nine square bastions on the exterior (Fig. 3). 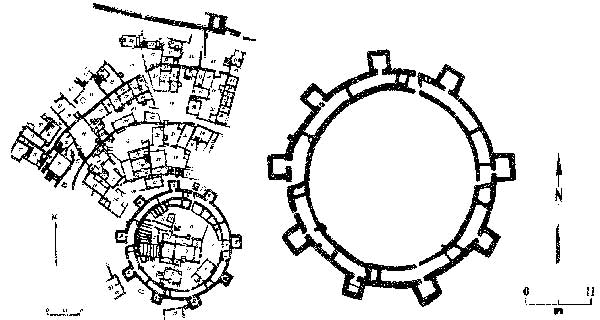 In Margiana, excavations at Togolok-1 and Togolok-21 have yielded the remains of multi-roomed temples, of which that at the latter site is more elaborate. Covering an overall area of about 1.5 hectares, the Togolok-21 complex had in the centre a 60 x 50 m. unit enclosed by a 5-m. thick wall which was provided on its exterior with four circular towers, one at each corner, and two semicircular towers, one each abutting the exterior of the eastern and western walls. This central unit had two more enclosure walls at successive distances, which too were provided with circular towers at the corners and semicircular towers along the walls (Fig. 4). 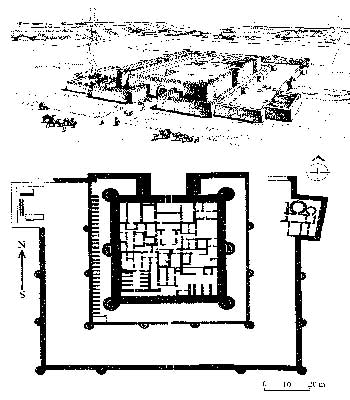 
Besides the foregoing temples, at Gonur (also in Margiana) has been brought to light a massive architectural complex of secular nature. Called variously as ‘Citadel’ or ‘Kremlin’, it measures 120 x 115 m. on plan and is enclosed by a fortification wall, having on the exterior a rectangular tower at each corner and four rectangular towers on each side. Here is the plan of the ‘Kremlin’ which incorporates within its premises the king’s palace, audience hall, administrative blocks, garrison complex, etc. (Fig. 5). 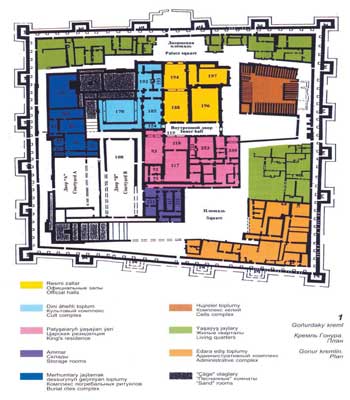