Sculptures of the Indus Valley

The story of Indian art and sculpture dates back to the Indus valley civilization of the 2nd and 3rd millennium BCE. Tiny terra-cotta seals discovered from the valley reveal carvings of peepal leaves, deities and animals. These elemental shapes of stones or seals were enshrined and worshipped by the people of the civilization. Two other objects that were excavated from the ruins of the Indus valley indicate the level of achievement that Indian art had attained in those days. The bust of a priest in limestone and a bronze dancing girl show tremendous sophistication and artistry.

The next golden chapter of Indian sculpture opens in the 3rd century BCE, when the Mauryan Emperor Ashoka adopted Buddhism and set out on a mission to spread the teachings of the faith as far and wide as possible. He had 85,000 stupas or dome-shaped monuments constructed with the teachings of Buddhism engraved on rocks and pillars. These inscriptions, which served as edicts can be seen in Buddhist monuments in Gujarat, Bihar, Madhya Pradesh and Tamil Nadu. The famous Ashoka Pillar at Sarnath in Madhya Pradesh gleams in polished sandstone representing the hieratic art under the Mauryan Empire. The lion capital of the pillar is now the official emblem of the Indian Republic and the sacred wheel of law or the dharmachakra is symbolic of the first sermon that Buddha delivered at Sarnath.

The Great Stupa at Sanchi is perhaps the finest surviving relic of the Mauryan Empire and is a renowned Buddhist monument. Its finely carved gateways depict Buddhist legends and lifestyles of two thousand years ago. The foundation of the Stupa was laid by Ashoka and he set up monasteries here as a retreat for the Buddhist monks. The Great Stupa is fifty-four feet high and is surrounded by a stone railing and four elaborately carved gateways on each side. The gateway reliefs depict tales of Buddha's incarnations, his life as a prince, his moment of enlightenment, his sermons and his worshippers. This site at Sanchi also includes remains of smaller stupas, pillars and monasteries. 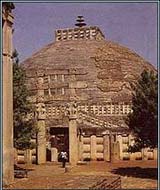 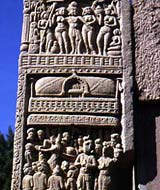 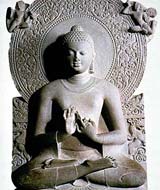 In the 1st century AD, the position changed somewhat radically in art and sculpture. The human figure replaced the symbolic representation of Buddha and his teachings. Though Buddha opposed the idea of idol worship, his cult image was established and became essential for acts of worship. The Mathura and the Gandhara schools of sculpture imparted human form to Buddha's image. To emphasise his divinity, this human form was depicted with features like a halo around the head, the dharmachakra engraved upon his palms and soles of his feet, and the lion throne representing his royal ancestry. These early stone images of Buddha are awe-inspiring in terms of size and magnificence.

The Buddha statues of the 5th century exhibit a unique sensibility with human figures that are meditative and serene, a body that is subtly modelled and a face that glows with enlightenment. Here, the ultimate definition of the divine is indicated in the soft folds of the dress, the exquisite curvature of the hands and the half-closed eyes of the Buddha.

The 4th, 5th and 6th centuries AD witnessed a tremendous resurgence of Hinduism when it became the official religion of the Gupta Empire. Consequently, this era was also marked by the emergence of innumerable images of popular Hindu Gods and Goddesses. Images of Vishnu, Shiva, Krishna, the Sun-God and goddess Durga evolved in this period. The Udaigiri caves in Madhya Pradesh house a colossal image of Vishnu. Here he is presented as the great savior who rescued 'mother earth' from the depths of the ocean, in his incarnation as a varha (boar). Other statues of this period found in various temples and museums are indicative of the various dimensions of early Hindu art and sculpture. 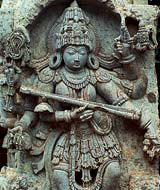 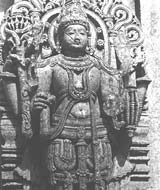 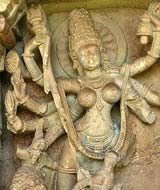 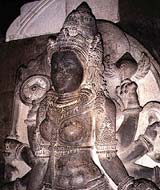 The link between dance, drama, literature and art became crucial to aesthetic expressionism in centuries to come. This new era in art and sculpture witnessed a unique fusion, a synthesis embodied in the caves at Ajanta and Ellora and the temples of central and South India.

Located north-east of Bombay, near Aurangabad, Ajanta and Ellora are two astonishing series of temples carved out of living rock over the course of fourteen centuries.

During the 4th century AD. in a remote valley, work began on the Ajanta caves to create a complex of Buddhist monasteries and prayer halls. They depicted the story of Buddhism, spanning the period from 200 BCE to 650 AD. As centuries passed, numerous Buddhist monks and artisans excavated a set of twenty-nine caves, some cells, monasteries and Buddhist temples. All of these were carved from the rock cliff at Ajanta. These caves are adorned with elaborate sculptures and paintings, which have withstood the ravages of time. 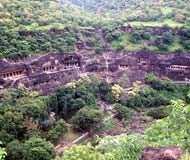 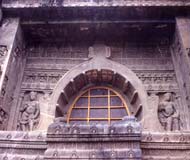 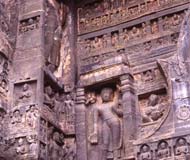 The 29 caves were built as secluded retreats of the Buddhist monks, who taught and performed rituals in the Chaityas and Viharas, the ancient seats of learning, and nerve - centers of the Buddhist cultural movement. Using simple tools like hammer and chisel, the monks carved out the impressive figures adorning the walls of these structures. Exquisite wall - paintings and sculptures speak volumes of the India of yore. Many of the caves house panels depicting stories from the Jatakas, a rich mine of tales of the several incarnations of the Buddha. Images of nymphs and princesses amongst others are also elaborately portrayed. Amid the beautiful images and paintings are sculptures of Buddha, calm and serene in contemplation. 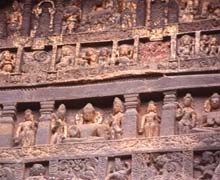 Work started on the Ellora caves in the seventh century AD where another set of caves were created from living rock. Buddhism, Jainism and Hinduism inspired these sculptors to create these elaborate rock carvings. The Buddhist and Jain caves here are ornately carved yet seem quiet and meditative whereas the Hindu caves are filled with a divine energy and power.

The finest specimens of cave-temple architecture, they house elaborate facades and exquisitely adorned interiors. These structures representing the three faiths of Hinduism, Buddhism and Jainism, were carved during the 350 AD to 700 AD period. The 12 caves to the south are Buddhist, the 17 in the center dedicated to Hinduism, and the 5 caves to the north are Jain.

The sculpture in the Buddhist caves accurately conveys the nobility, grace and serenity inherent in the Buddha. Caves 6 and 10 house images from the Buddhist and Hindu faith, under the same roof, the latter dedicated to Vishvakarma, the patron saint of Indian craftsmen. The Vishvakarma cave is both a Chaitya and a Vihara, with a seated Buddha placed in the stupa. Its two - storeyed structure sports a colorful pageant of dwarfs, dancing and making music.

The most impressive and majestic creation at Ellora is the Kailasa Temple, a full-sized freestanding temple flanked by elephants carved out of solid rock. Pillars, podiums, spires and towers combine to produce an awe-inspiring representation of Shiva's Himalayan abode. 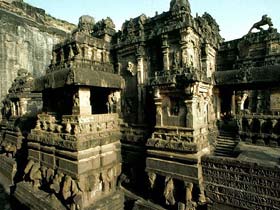 The Kailasa temple in Cave 16 is an architectural wonder, the entire structure having been carved out of a monolith, the process taking over a century to finish. This mountain - abode of Lord Shiva, is in all probability, the world's largest monolith, the gateway, pavilion, assembly hall, sanctum and tower, all hewn ou t of a single rock. What is amazing about it is the fact, that unlike other temple structures, which are built base onwards, the sculptor or architect involved here, started carving from the very top and the sides. Gigantic, though it is, it remains one of the most delicate and intricate ancient works of art. The Dumar Lena cave resembles the famous cave - temple at Elephanta, and is dedicated to Lord Shiva.

The Jain caves are about a mile away from the Kailasa temple, amongst which Cave 32, houses a beautiful shrine adorned with fine carvings of a lotus flower on the roof, and a yakshi on a lion under a mango - tree, while Caves 32 and 34 contain grand statues of Parasnath. The other Jain caves sport the images of Tirthankaras, and one of them, also, has a seated figure of Mahavira.

These cave shrines are memorable for their invaluable contribution to the enormous wealth of Indian heritage. 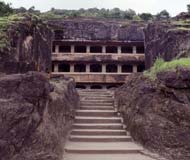 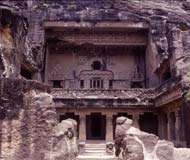